"IT TOOK a jury at an inquest just under four-and-a-half hours to decide what gardaA- have been investigating for 34 years. 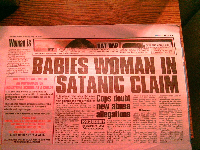 At the four-day inquest held at Dublin County Coroner's Court last week, Cynthia alleged she was raped repeatedly from the age of seven or eight into her teenage years by four different people. And she wasn't the only one making accusations. Her three sisters and a niece made allegations of sexual abuse also, as did two of her brothers, both now dead.
All the horrific details of sodomy and incest were not reported in the newspapers. No one could bear to read it. But it's what remained unsaid at the coroner's hearing that may be more shocking than the alleged sexual assault.
Why did 11-year-old Cynthia - who said she had just watched her mother kill her baby that night and then attempt to drown her - not run into the arms of gardaA-?

"I can't go into that, " she told the court quietly when questioned. Coroner Dr Kieran Geraghty was quick to interject. "There are reasons outside this inquest why she couldn't go to gardaA-, " he informed the jury, who looked puzzled. It seemed strange to them that she'd rather go home to a house where she said she suffered systematic rape on a regular basis than seek police help.
Implications hung heavy in the air about why she would fear some members of the gardaA- more than members of her own family."
...........................
(Quote from Jim Cairns!)
Note how the Sunday Tribune journalist inserts a capital A in many words and names in the article- is he/she inferring that the A represents an occult symbol?